NOW MORE THAN EVER

UJEB means a lot of different things to the people in our community.
With your help, we are shaping the future of Jewish engagement.

Here are stories that inspire us 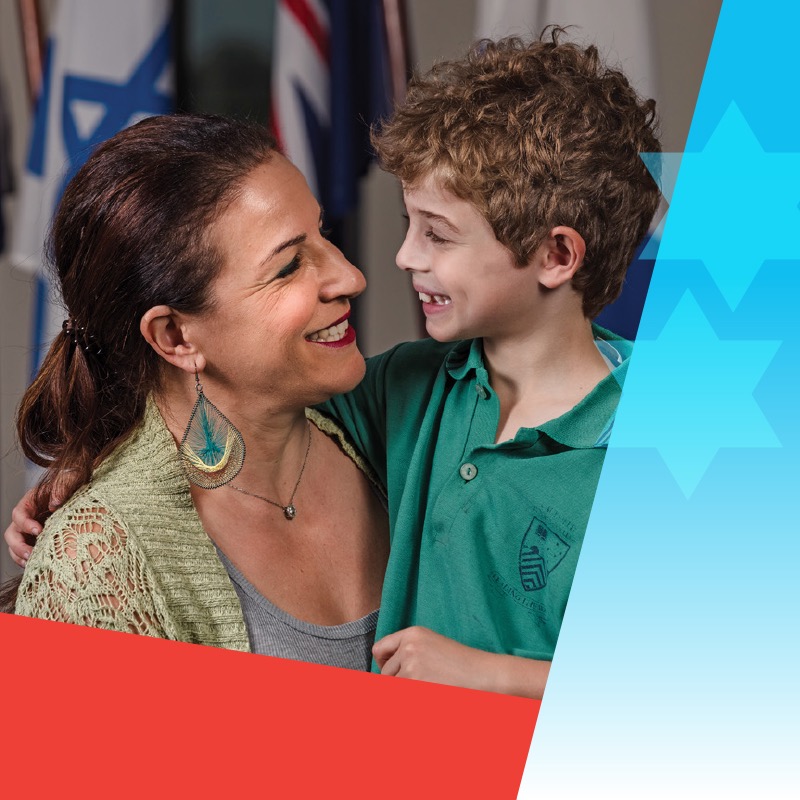 Keren Loyer is mum to 3 school-aged boys, and her family is involved in the whole spectrum of UJEB’s programs.

‘I love that through all of the different stages in life and ages, our children can do different UJEB programs that connect them with Jewish kids from other government schools, and with the Melbourne Jewish community,” she says.

Keren’s eldest son Nathan, 14, is in year 8 at Glen Eira College (GEC). He is currently studying Hebrew in the UJEB-supported language subject, and loves going to the weekly J-Lunch sessions at his school. He is also involved in UJEB’s BBYO teen engagement program, and went on his first UJEB camp this year.

Nathan also took part in UJEB’s Hebrew Immersion Program (HIP) and after-school Jewish studies at Caulfield Junior College (CJC) during his primary years. His younger brothers Jed, 11, and Ari, 8, are now following in his footsteps at CJC HIP, and Keren is president of the parents committee for this program.

“It’s fantastic that UJEB can provide a Jewish cultural experience for our children at government schools,” says Keren.

“Watching them learning Hebrew, singing the “Hatikva”, celebrating all of the chagim…it’s very special.”

“I think it’s great how inclusive UJEB is. Our children can go to government schools and mix with all different cultures, but then still come back to their own culture, religion, heritage and language.”

“Even in schools where there are only a few Jewish students, it’s vitally important that UJEB can still provide a Jewish education to those that want it, in a very affordable way,” she says. 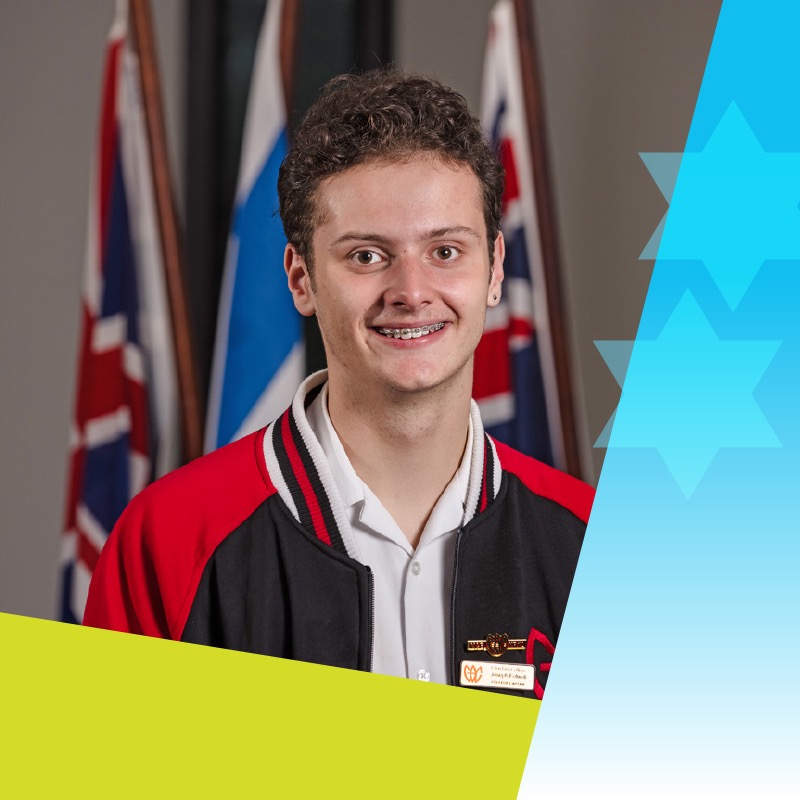 UJEB student Joseph Folwell, 17, is currently in year 12 at Glen Eira College (GEC). He has been to UJEB camp every year since he was in grade 3.

This year he joined over 70 students aged 8-18 for an incredibly fun and exciting post-COVID camp – his last as a school student.

In 2019 Joseph participated in the UJEB/BJE five-week Israel program, which was a life-changing experience for him.

“Israel allowed me to discover why it is important to be Jewish, and understand what Judaism means to me,” he says.

Joseph attended Victorian government schools throughout both his primary and secondary education. UJEB has been vitally important in developing his sense of Jewish identity and connection to the community.

UJEB has been one of the best things for me,” he says.

“UJEB gave me the experience of meeting so many new people and realising that we all share one thing, and that is that we’re Jewish. I think that’s so important.”

Joseph is now involved in the UJEB J-Lunch program at his school. He also holds a leadership position in UJEB’s BBYO teen engagement program, and is a school captain at GEC this year.

“It doesn’t matter where you live, UJEB connects you…being Jewish is what brings us all closer together,” he says. 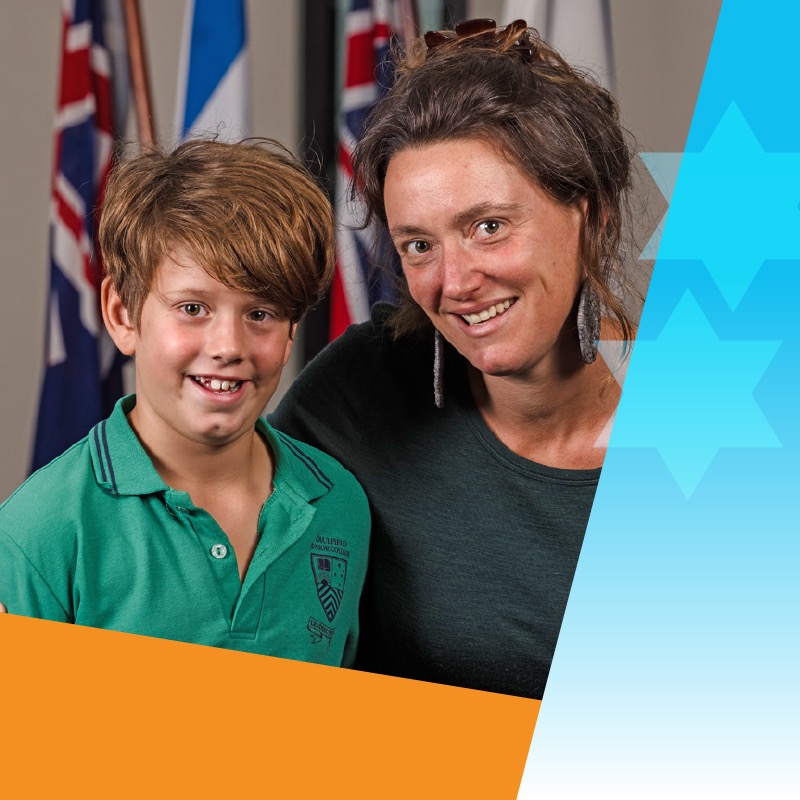 Amos Faigenbaum, 9, is currently in grade 4 at Caulfield Junior College (CJC). This is his 5th year in UJEB’s Hebrew Immersion Program (HIP) at the school, and in 2021 he also attended his first UJEB camp.

“I love learning Hebrew with UJEB because when I’m older and go to Israel, I’ll be able to speak Hebrew,” says Amos.

He also loves studying Hebrew with his friends at school, and learning about the Jewish festivals. “I liked Purim when we all dressed up, and we had an assembly and a special Purim play,” he says.

Amos had a blast at this year’s UJEB camp. “It was really fun. The highlights were the giant swing, the vertical climbing course, the giant flying fox, the mud walk and the special Shabbat dinner. I also made some new friends from other schools,” he says.

Amos’ family is observant – they keep Shabbat, kashrut, observe the festivals and attend shule every week. “Our kids get quite a lot of Jewish education from home,” says Amos’ mum Lara.

His 2 brothers also attend HIP at CJC. “I speak Hebrew and am a Jewish studies and Hebrew teacher, so it’s important to me that our children learn to read, write and speak Hebrew,” says Lara.

“But it’s also important to us that they go to the local school. So it’s been really wonderful to have UJEB at our school.”

“I want our children to be on a journey where they’re learning Hebrew, connecting with it and loving the language and Israel. They get all this through the UJEB HIP program,” she says.